Pro Tip: if an expert—like a proper one, one you know does a good job and comes highly recommended—tells you it’s better to do something differently than what you’ve initially requested, because you have no idea how it all works, but the expert certainly does, you listen to their advice.

Otherwise, you may, more or less, end up in a situation described by this one Reddit user who complied, oh so maliciously, to the client’s request regarding embroidered logo placement, which was simply ridiculous.

You’d wonder who would approve this as a uniform, but it’s a thing, and a Redditor shared how problematic this particular design is when you need to slap a logo on it 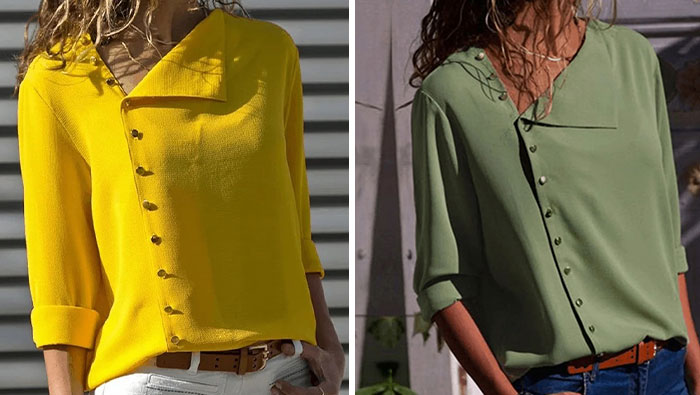 Image credits: OverStock (not the actual photo, but the one that best explains it)

Reddit user and embroiderer u/PANCHOMUFFIN recently posted a story on the r/MaliciousCompliance subreddit about a client that her company has who had an order for embroidered logos on a variety of types of uniforms they have.

All was fine and dandy, except the way the logos ended up not really finding a proper position on the left side of the shirt. As they were, the logo would be dangerously close to, if not inside, the armpit. So, the uniform would have very much benefited from having a logo on the opposite side as they would have more space for it. 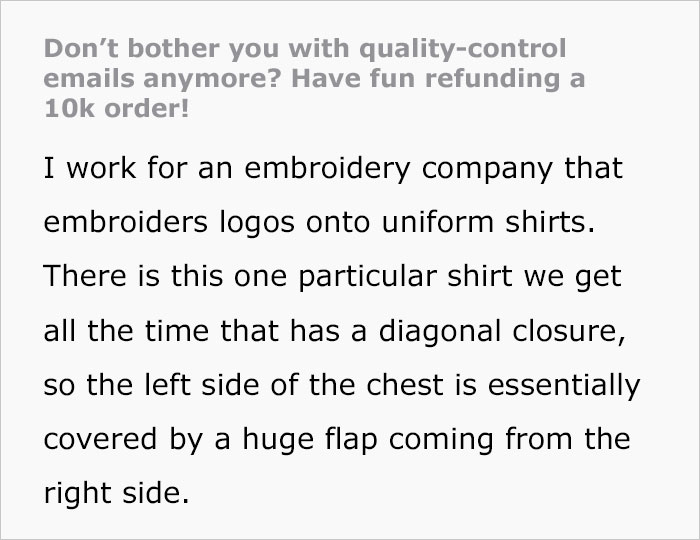 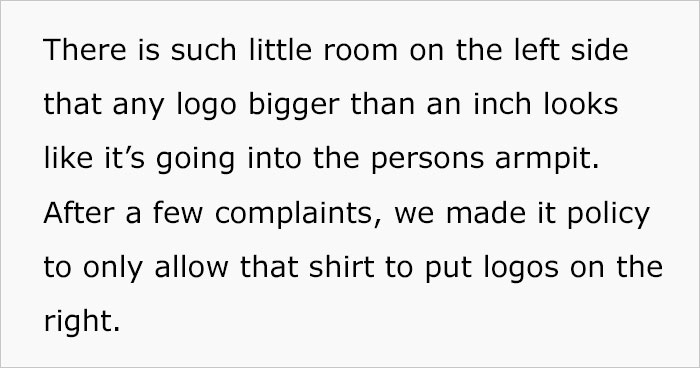 However, several e-mails later, it became apparent that the client did not agree, or more specifically, this one manager representing the client explained that putting it on the right side was a no-no, and even lashed out at OP.

The manager also elaborated that since they were able to do the embroidery on the left, they could do it again, and no excuses. Also, no emails suggesting better logo locations and from that point on all order requests would be final. That’s it.

Muffin saved the e-mails for future reference as they would surely be necessary for what they were about to do, and got their boss’ blessing to “stop quality control” regarding said order. 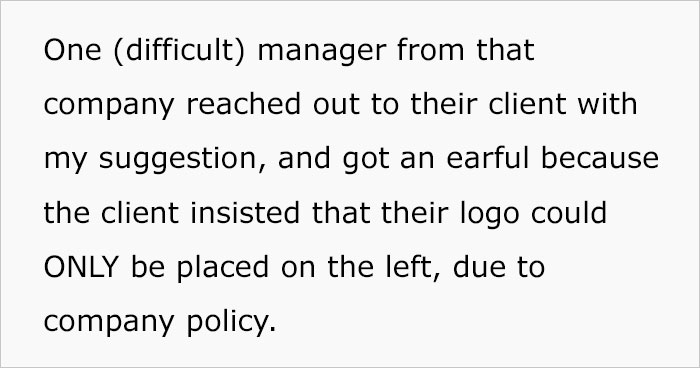 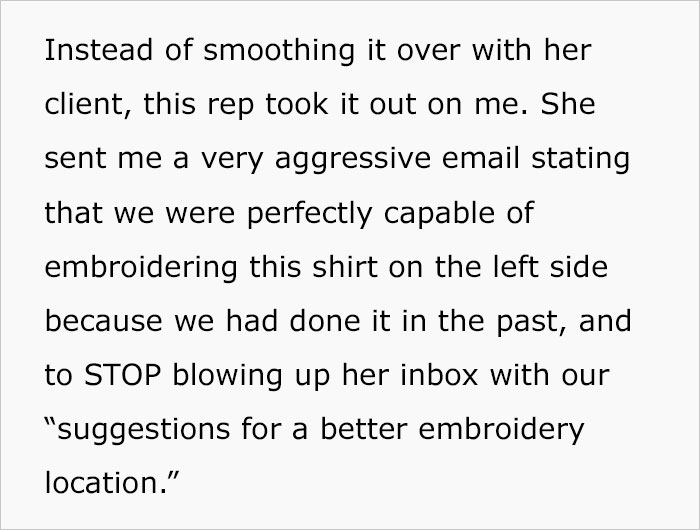 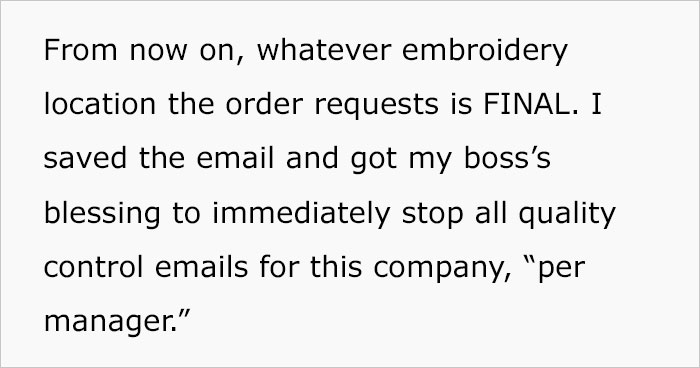 So, in comes a huge order, and all these particular shirts are done with the logo on the left, just like the client asked, and all with perfect adherence to malicious compliance protocol.

A week later, an exec from that company gets in touch with OP—provides some pictures of the shirts they did, all according to the “it’s in the armpit” predictions. Since this was not acceptable, they were supposed to refund the entire order, which turned out to be upwards of $10,000. This is besides losing the client.

Well, you can guess where this is all going when a very huge order comes in worth around $10,000 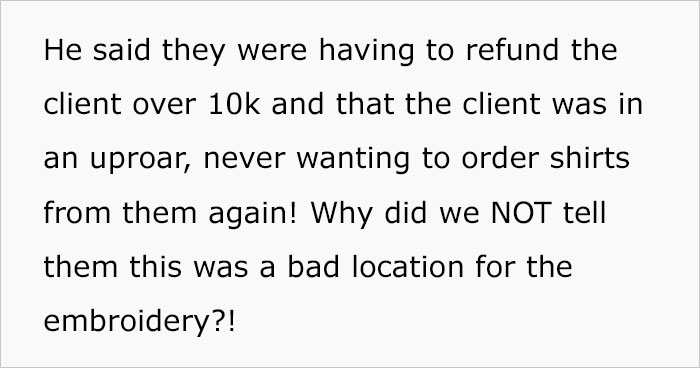 All OP did was forward the e-mails they saved. In a further edit to the post, Muffin added that it was confirmed that a $10K loss was inevitable to the company, and no, there were no re-orders following this incident. They also provided an example (first image in this article) of what the shirts looked like (not the actual ones, but the style to help understand it). 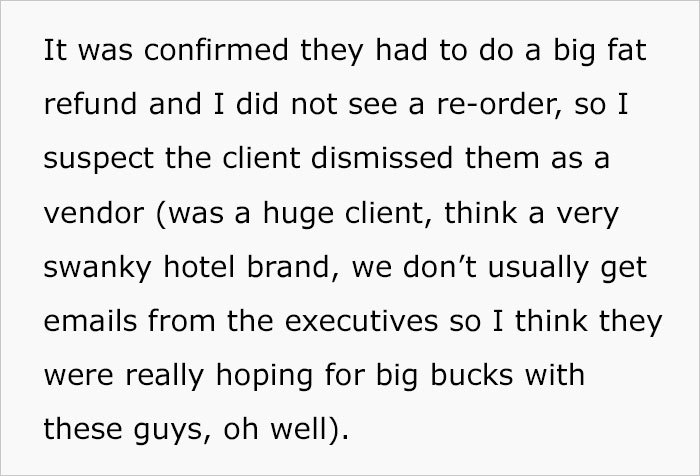 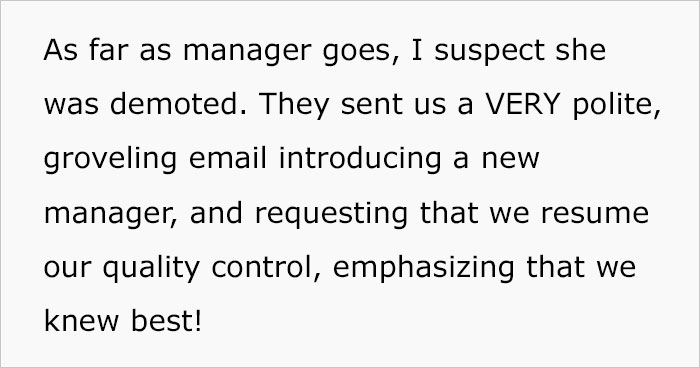 And the community of Malicious Compliers approved. The post managed to rack up a tad bit over 13,000 upvotes, receiving a bit over 20 Reddit awards and engaging people to share similar stories of how relatable this all is to some, as well as comment on the situation of how people never learn, with one commenter asking the difficult question: “why is this shirt still an option at all?”

People online loved the story, with some sharing their own experiences and thoughts 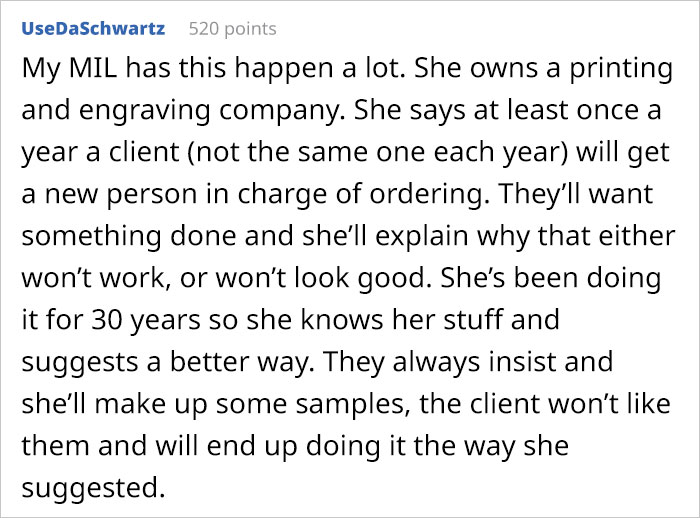 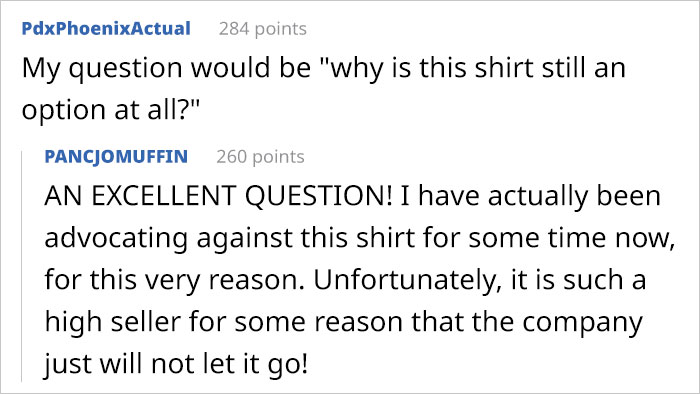 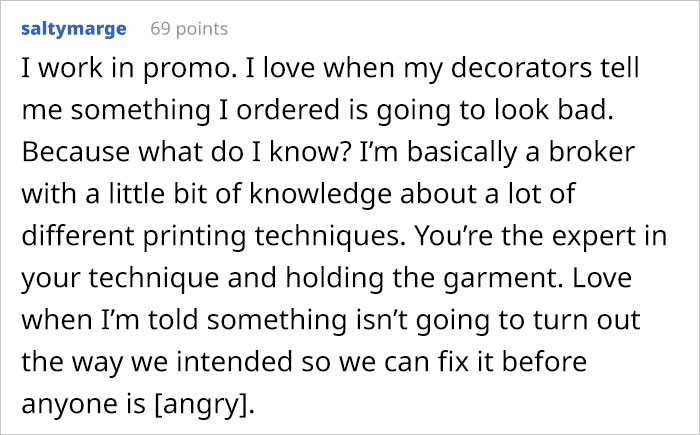 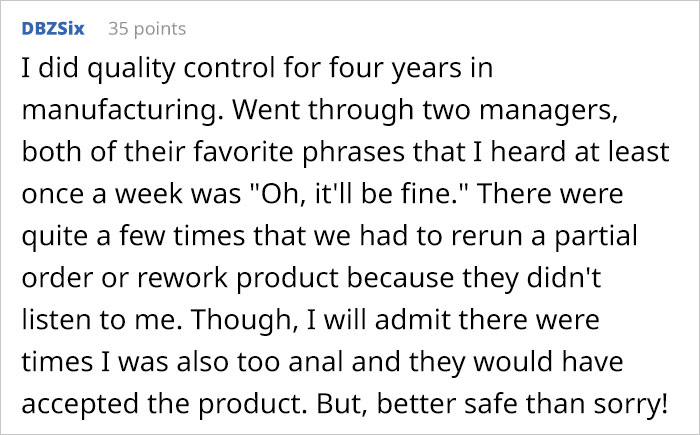 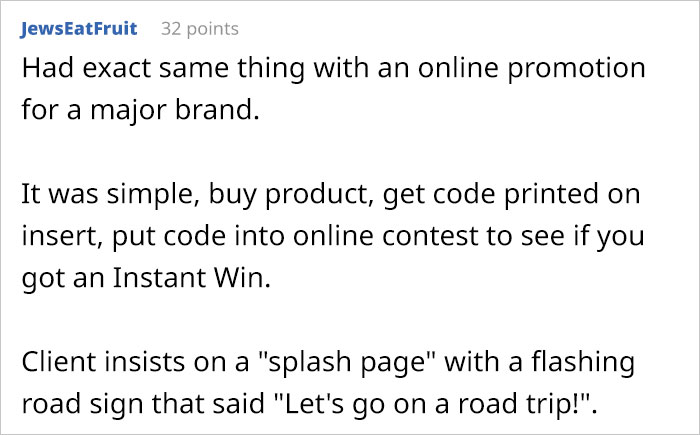 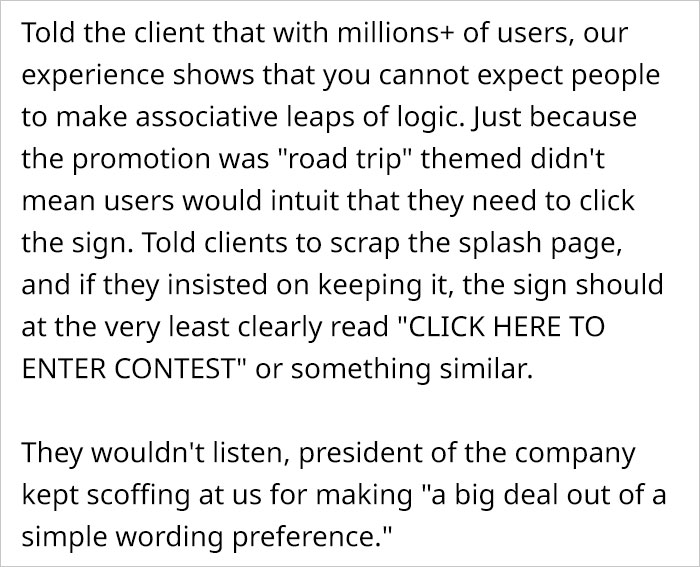 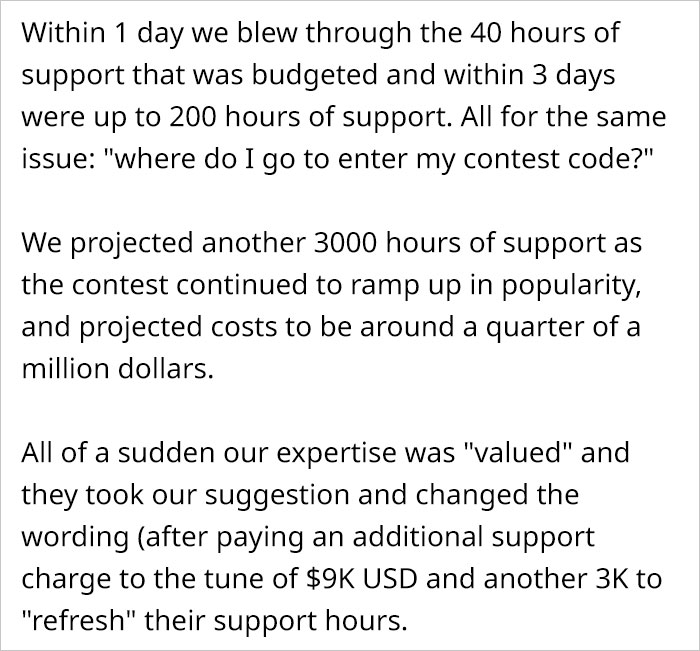 You can check out the post as well as the comments on Reddit here, and take a look at all of the other Malicious Compliance posts we’ve covered here, with this one about a hotel receptionist maliciously complying to a client’s demand to be taken to a 4th-floor room in a hotel with 3 floors being one of the more recent additions.

But don’t go just yet, and leave us a comment with your thoughts on this situation in the comment section below!

The post Company Forced To Refund K Order After Manager Tells Team To Not Pester Her With Quality Control E-Mails first appeared on Bored Panda.